I'm starting to provide Chinese / English versions of some posts, switch with the Language menu above. 我开始提供部分文章的中文、英文翻译，请使用顶部语言菜单切换。

On the modern Internet, most websites already support HTTPS. The SSL/TLS encryption protocol will encrypt user's request and the website's response, so that malicious users along the way cannot steal or tamper with the information. One important component of SSL/TLS protocol is asymmetric cryptographic algorithms. For these algorithms, the key is separated into a public key and a private key, with the public key being public and the private key being protected carefully.

Asymmetric encryption guarantees the security of exchanging symmetric keys between the browser and website server, and ensures that the data is not stolen or tampered with.

But with the birth of quantum computers, there comes a slight change. With a quantum computer that is "powerful enough", or having enough number of "qubits" (quantum bits), Shor's Algorithm that runs on quantum computers can efficiently crack traditional asymmetric encryption algorithms including RSA and ECDSA, which are based on the difficulty on decomposing prime factors.

Yet with the heat on quantum computing, quantum computers evolve rapidly. The most powerful quantum computer made public to this day is IBM's 53 qubit computer (See Quantum Supremacy on Wikipedia), still not enough for cracking RSA or ECDSA with Shor's Algorithm, but technology developing at high speed may make this possible any time.

Therefore, cryptographers start to develop asymmetric encryption algorithms that cannot be efficiently cracked with quantum computers, and promote their usage, to prepare for the day when RSA is cracked.

Since late 2016, the Open Quantum Safe Project began integrating existing quantum-resistant algorithms into their liboqs library, and integrate it to popular cryptographic libraries, such as OpenSSL and BoringSSL, to simplify the deployment of new cryptographic algorithms.

At the same time, the project also provides documentation on compilation and integration of software, including nginx, Chromium, etc. Therefore, by making simple modifications according to the documentation, we can be prepared for the birth of a practical quantum computer.

WARNING: All post-quantum cryptographic algorithms here are relatively new, and are under the process of NIST standardization, so they may still have undiscovered weaknesses. Although Open Quantum Safe does provide workarounds to reduce the risk, it's not recommended to use them in production before their standardization process is complete.

Since nginx uses OpenSSL or BoringSSL as the cryptographic library, there's no need to make any change on nginx, simply replacing OpenSSL with the Open Quantum Safe version is enough.

Open Quantum Safe provides a modified Dockerfile that serves as a reference.

Referring to the material above, I also modified my Dockerfile that I use to compile nginx, to use Open Quantum Safe's OpenSSL. It is available here.

Compared to compiling a normal nginx, there are 2 main changes:

And proceed to compile nginx normally.

After the compilation and installation is complete, you also need to change the parameters to use the post-quantum asymmetric cryptographic algorithms, including key exchange algorithms and identity verification algorithms:

After finishing configuration, you can use the curl Docker image provided by Open Quantum Safe to test your website:

Open Quantum Safe also provides a guide to compile Chromium that is availale here. Compared to vanilla Chromium, the 4 main differences are:

Then proceed to compile Chromium as normal.

Note that compiling Chromium takes a really long time. It took 8 hours on my i7-7700HQ. If you have a weaker CPU, be prepared for waiting all day long.

After the compilation and installation is complete, launch Chromium to access a website with post-quantum cryptography, then open the Security tab in Developer Tools: 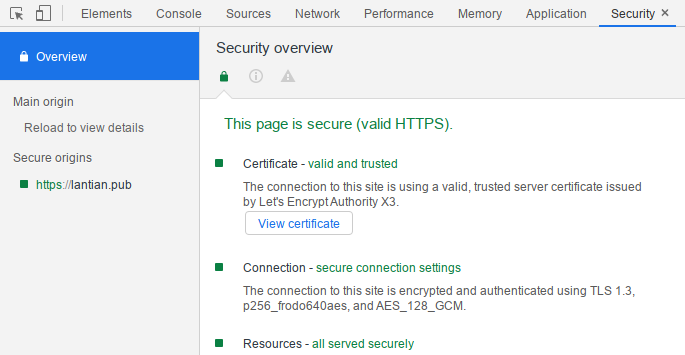 Here p256_frodo640aes is being used, which means you're browsing with post-quantum protection.

My website now supports post-quantum cryptography that you can use as a test. Or you may access the official test site of Open Quantum Safe, which provides all combinations of key exchange and identity verification algorithms, and allows for a more comprehensive test.

An additional note, BoringSSL from Open Quantum Safe only supports a fraction of key exchange algorithms:

This list is only available at the official test site. This is why I only selected them in the nginx configuration.