DN42 is an experimental network, where everyone helps everyone. Nobody is going to blame you if you screwed up. You may seek help at DN42's IRC channel, mailing list or the unofficial Telegram group.

Since DN42 is a network for experimentation, a lot of relatively inexperienced users also participate in it. Therefore, occasionally an inexperienced user may misconfigure his/her system and impact the whole DN42 network or even shut it down.

As a more experienced user, here I will teach new users about some operations that can kill the network and about defense against such misconfigurations that everyone can set up against peers.

WARNING: You should not actually perform these operations in DN42. You should focus more on protecting yourself against them.

Malicious actions will make you kicked from DN42.

The stories are based on real disasters in the Telegram group and IRC channel.

You just joined DN42 and plan to connect all of your servers. You've already peered with a few others on several of your nodes, but you haven't finished on your internal routing yet.

So you plan to configure OSPF. You opened Bird's configuration file and added a protocol:

Satisfied, you copied the config file to every server and ran bird configure. You checked and confirmed that every server obtained routes from each other via OSPF.

Suddenly a message box pops up on your IRC client / Telegram. You clicked on it:

But since your internal networking uses OSPF, which has no idea what BGP paths are, it doesn't preserve them while passing routes around. Now another node of yours obtained 172.22.76.184/29 via OSPF, yet without any path information. It will then proceed to announce the route with your own ASN to your peers, causing a hijack.

Here is a graph of what's going on:

Babel is Fun, Too

Those in the Telegram group are really nice guys. As they help you in fixing the problem, they also recommended Babel to you:

But they don't recommend Bird's built-in Babel support since it doesn't support selecting paths by latency.

You are persuaded, removed the OSPF configuration, and installed Babeld. Soon each of your nodes is getting Babel routes. You waited for a few minutes. No sign of catastrophe yet.

But you do notice that Bird isn't announcing the routes via BGP. The Telegram guys instigated you to enable the learn option of Bird's kernel protocol:

You do this. A few minutes later, you are called out again by people in IRC and Telegram. Yes, you hijacked other's networks. Again.

It is actually the same problem as the OSPF one since Babel also dropped all BGP path information while passing routes around. However, Bird ignores routing information installed to the system by other routing software by default, until you enabled learn.

Route flapping is a whole range of errors that cause one problem: they cause the BGP routing software to frequently switch (or flap) the best route they chose. Since the best route gets announced to other nodes via peering, the flapping sets off a chained reaction, where multiple connected nodes will flap together for one node's mistake. Eventually, the problem will be distributed to the whole network.

This process consumes a significant amount of bandwidth or traffic. Since many people in DN42 use cheap VPSes for nodes, there are only two possible outcomes eventually:

In addition, route flapping may cause severe impacts:

For example, one user in the Telegram group had a misconfiguration while transitioning from Full-mesh + Direct connections to Multihop. 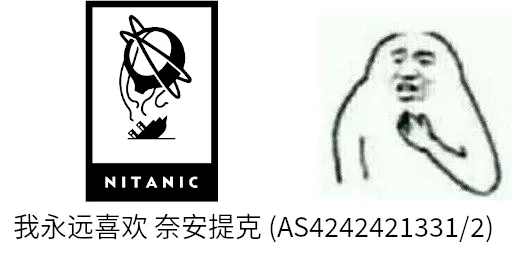 He didn't disconnect BGP in the process, and the Babel configuration error caused large amounts of routes to be announced and withdrawn.

Because of the chain reaction and the number of peerings the guy has set up, multiple large ASes had to disconnect from each other to control the problem (before he woke up).

By the way, this guy had a number of similar accidents before at a smaller scale, which this margin is too narrow to contain.

How Long is That IP Block?

Since it's the year 2020, you plan to add an IPv6 block to your network. With my DN42 registration guide, you registered yourself a IPv6 block, which quickly got merged to registry.

From your perspective, everything is normal. Yet on the other side of the planet, a message pops up on one person's phone/computer that his DN42 ROA generator is malfunctioning. He opens the registry page, facepalms, and commits this change: 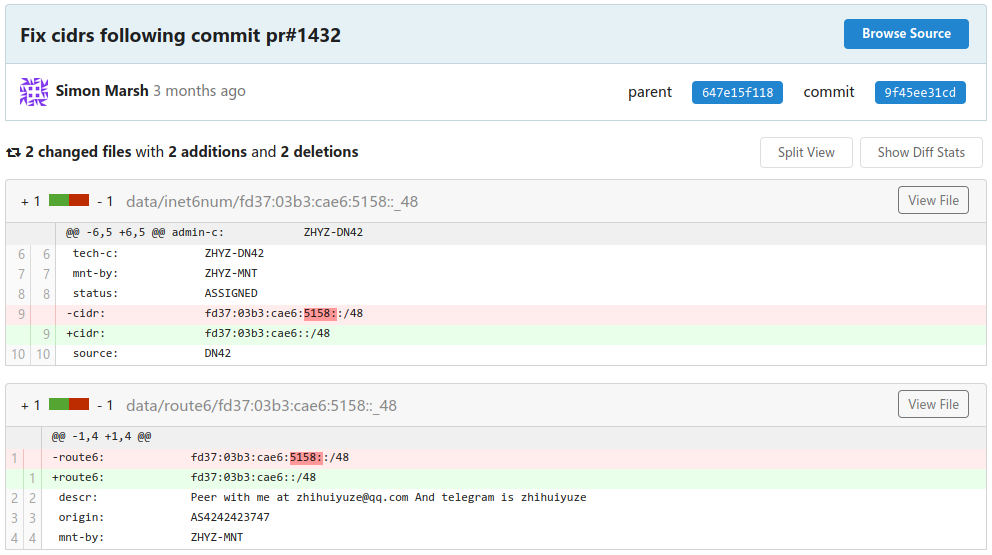 But for some reason, this error wasn't detected by DN42 Registry's schema checker, nor by the admin who inspected and merged the change, so it successfully ended up in the registry.

Later, the ROA generator found the erroneous IP block while parsing the registry and crashed.

And It Happened Again

Fortunately, except that the ROA update was delayed by a few hours, this error didn't impact the network itself much.

Since the decentralized nature of DN42 as it's born, you can write your own ROA generator as a backup.

Although my ROA generator also failed this time...

Initially, everything looked normal, until a few days later when some users on Telegram found that my looking glass bot times out on any IP in DN42.

Initially, everything is indeed normal, and my IP block 172.22.76.184/29 is announced correctly. Until Direct protocol performed a refresh and obtained 172.22.76.184/29 from one of the network interfaces, and sent the route to Bird routing table again.

The new route overwrote the previous route, and since it comes from Direct protocol, it's labeled with the community and wasn't broadcasted. Static protocol, on the other hand, is indeed "static", and won't overwrite the route again.

At this time, I effectively stopped announcing my IP range. No wonder I cannot receive any packets coming back to my nodes now.

In Bird, you should avoid getting the same route entry from multiple routing protocols, as they overwrite each other and may cause unexpected behavior.

I finally chose to limit Direct protocol to my internal IP range with a filter, so it won't overwrite my DN42 ranges again.

A new user registered an ASN: 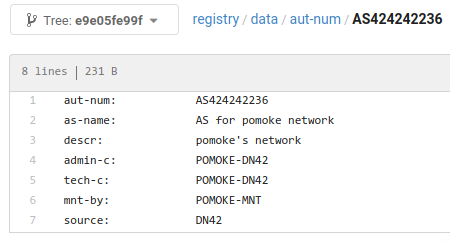 This is what happened to DN42: