I'm starting to provide Chinese / English versions of some posts, switch with the Language menu above. 我开始提供部分文章的中文、英文翻译，请使用顶部语言菜单切换。

Welcome to my third development log. In the two previous logs, I discussed the pitfalls I met in the RoboMaster competition and FPGA course final project.

This time I will be talking about my graduate design project, an air quality sensor network built by a 3-person group. The whole project is structured as follow:

This post is a record of pitfalls we've met during the development.

Why Not Arduino ¶

In the beginning, I simply got myself a random Arduino Nano from my pile of electronic modules, but soon I found problems:

So I bought an STM32 development board from Taobao with the following specs:

Speaking of STM32 development, a lot of people may have the first impression that it involves direct register manipulations, and you need to spend a lot of time reading documentation, such as datasheets. But STMicroelectronics has released some STM32CubeMX software years ago, which allows visualized configuration of on-chip components, one-key code template generation, and a fully-featured set of library functions that hide register operations. Thanks to this, STM32 development is not much more difficult than Arduino. 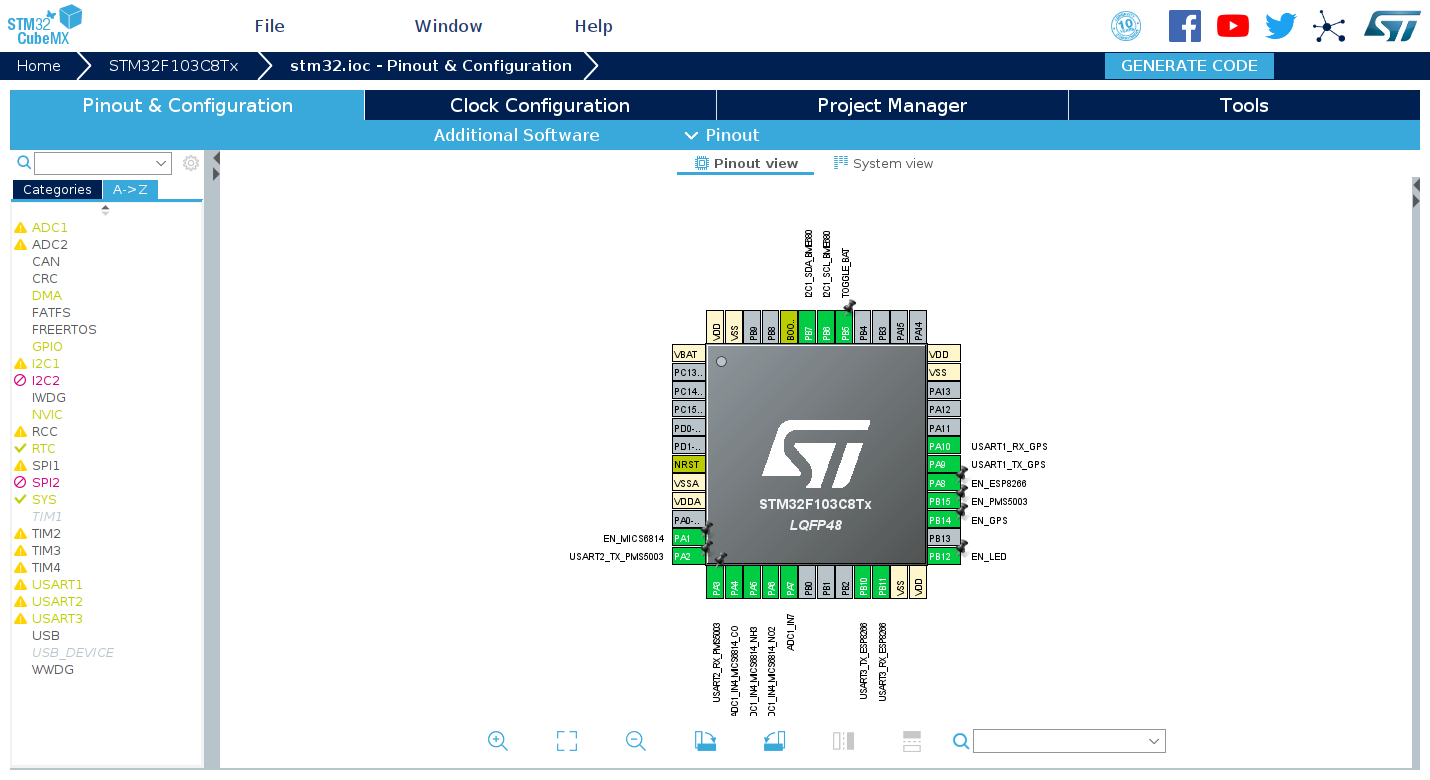 When We Don't Have Enough ROM ¶

But in the later stage of the project, we found that the 64 KB ROM of STM32F103C8T6 is no longer enough for us. The ROM space is mainly occupied by the following parts:

Therefore we tried to shrink the code size in these places:

Logging on to School Wi-Fi ¶

After research on the capabilities of ESP8266 Wi-Fi module, I concluded that:

The solution is kind of a cheat: I went through the code on my Raspberry Pi and found a login script to the school network. Back when I wrote that script, the login page wasn't using HTTPS, and what I was sending was a plain HTTP request. I tested it and found out surprisingly that it still works!

The final solution is: STM32 instructs ESP8266 to connect to that open network via AT commands, and also sends HTTP request via AT commands to simulate a login attempt. In this case, one less program needs to be coded.

Can't you set up a Wi-Fi access point with a router?

Well, you can't put a router around every sensor, can you?

Professor's weather station device also needs to connect to school Wi-Fi, so it can upload data to its cloud service. Unlike our ESP8266, we cannot modify its program, which means we cannot ask it to send another HTTP request to log on to the network.

The solution is to use a computer to spoof the MAC address of the weather station, log on to the school network, and then disconnect. The device will not be kicked out from logged-on status during short disconnections, and when the weather station is powered on at this time, it will be able to connect to the Internet without logging on itself.

Another problem is that the school Wi-Fi restricts to 4 devices per user account, and previously connected devices will be kicked out when that number is exceeded. Our sensor network consists of 10 devices; although they can log on again when they are kicked out, the weather station cannot do so.

The solution is again simple: since we're a 3-person group, we connected the weather station with another student's account.

In our program, BME680 is solely controlled by its closed source BSEC library. However, BSEC only supports measurements every 30 seconds or 300 seconds; if that interval is incorrect, BSEC will neither perform measurements nor return valid data.

But since BSEC relies on us to provide timing and communication functions, we made a dangerous move: decoupling the BSEC timing from the actual system time. Specifically, when we run BSEC every 15 minutes, instead of telling it 15 minutes has passed, we tell it that only 300 seconds has passed, or it's exactly the time for the next measurement, to force BSEC to do its job.

PMS5003 is quite simple to use. Simply pull the enable signal high to turn on its fan - wait 30 seconds - and read data from the serial port.

PMS5003 sends 32 bytes of data each time, with a fixed packet header and a checksum of the whole packet. To avoid reading only half of a packet, thanks to the characteristic of PMS5003 sending data every second, we did the following:

Due to the limitation of available devices, we had to assume that there wouldn't be major changes in gas concentrations and ignore the difference of slope of resistance. For resistance differences under the same condition, we swapped the fixed value voltage divider resistor to a potentiometer (variable resistor). Now instead of calculating absolute resistance values, the program computes the resistance ratio to the reference value (resistance of the potentiometer). Then, put all devices in the same environment, and adjust the potentiometers (and their readings in turn) with reference to weather reports and professional devices, so that they have the same reading.

18650 lithium batteries usually have a voltage range of around 3.0-4.5V (not exact), which is above the 3.3V input voltage limit of STM32. Therefore two resistors are needed to divide the voltage, and the result is connected to STM32's ADC.

STM32 also has a built-in temperature sensor, which represents values with ADC readings. However, the temperature sensor on STM32F103C8T6 is not calibrated and is vastly different from the actual temperature, and as we already have BME680, this sensor is kind of useless for us.

Another thing about STM32F103C8T6's ADC is that if it needs to read in multiple inputs at the same time, a plain HAL_ADC_Start won't work, and DMA is a must.

DMA, or direct memory access, tells peripherals to write data directly to a specified position in memory, with no help from the CPU. DMA can be used to reduce CPU usage or implement continuous sampling. Corresponding DMA channels need to be added in the DMA Settings tab on the ADC page of STM32CubeMX to be used.

But since we don't need continuous sampling, we can set a "sample complete" flag after receiving the interrupt in the DMA's interrupt handler (usually in stm32f1xx_it.c). Now when the program is running, it first calls HAL_ADC_Start_DMA to start sampling, and then repeatedly checks the flag until the task is complete, and call HAL_ADC_Stop_DMA to stop. If you're brave enough, you may live without that flag and simply do a delay.

Our device needs to sample data every 15 minutes with the battery as the power source and continuously run for a week. This poses a high requirement for its power consumption in sleep mode.

To reach that goal, we need to switch STM32 and sensors to either low power consumption mode or off position.

Here is an example code snippet of sleep and timed wake up:

Turning off PMS5003 and ESP8266 is easy since they both have a pin to control power status. When that pin is pulled low, they will both automatically enter the hibernate mode, with a few microamps of power consumption.

Turning of BME680 is also easy, which is done by BSEC.

But neither ATGM336H nor MiCS6814 has built-in power control, and they will continuously run and consume a lot of power. Therefore an external switch is needed to cut their power.

Initially, we planned to use an N-channel MOSFET to cut the power: 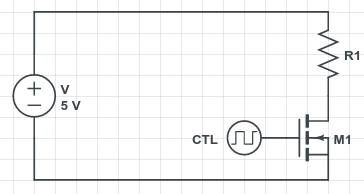 CTL in the schematic represents the digital output of STM32, and R1 is the corresponding module. When CTL outputs 0, MOSFET M1 will cut the circuit to turn off R1 and vice versa.

But in our testing, when the STM32 outputs 1, its output voltage 3.3V is not enough for the MOSFET to turn on completely. The MOSFET still has a resistance of around 30Ω, which divides too much voltage away, and the module cannot obtain enough power to work normally.

So we added a BJT triode to pull the digital output to 5V: 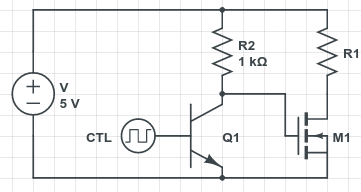 Some stores on Taobao sell power level shifters that uses 2 levels of resistors and triodes to correct the inversion; but we don't care about this, as it's a simple modification of the program.

But in our testing, the circuit consumed a lot of power, up to 50 mA when power is cut off. Closer inspection reveals that the BJT triode pulls the STM32 output to as low as 0.8V, and the output is almost in a "shorted" state, outputting a large current.

The solution is an additional resistor for limiting current, R3, in the following schematic: 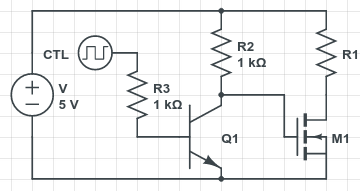 So STM32 can work normally while outputting 50 mA...

The MH-CD42 power module is originally designed as a battery management module for power banks. One of its functionality is to turn off the power output when no devices are connected. MH-CD42 measures the output current, and when the current is below 45 mA for around 30 seconds, it turns off automatically.

For power bank users, this is a useful feature, but for us with a sleep mode current of a few mA, this functionality greatly interferes with normal operation. What's more complicated is that, since MH-CD42 is a highly integrated module, there is no power pin we can forcefully pull up to keep the power on.

We first searched for the datasheet of MH-CD42 but almost found no useful information. But we did find a post on MH-CD42, in which the author found that the MH-CD42 module has the same external circuit as another IP5306 chip and confirmed that they have equivalent functionality.

This post (Chinese) introduces a way to keep the output of IP5306 on, specifically to connect an output of the MCU to the button of the power module, and send a low signal every ten seconds. It simulates pressing the power button every few seconds and keeps the power on.

So we soldered a wire from STM32 to the soldering pad on the power module, and wrote some code:

All SQL queries on InfluxDB are done over HTTP requests, so our STM32 only needs to send a simple HTTP request. We can even disregard whatever data from the server.

The main reason is that we are out of space on STM32's ROM, and cannot afford to add code to parse HTTP replies.

Here is an example request:

This request creates a datapoint called stm32_vref in database INFLUXDB with an extra tag id=1 for device identification and a value of 3.5. Actually, one request may contain multiple data points separated by Linux line feed \n. Note that you cannot use \r\n instead; this will cause an error.

Here we have our code (simplified) to generate the HTTP request:

Variables tcp_send_buf and tcp_send_len will be used by the code that interacts with ESP8266, where the HTTP request is actually sent.

The AT instruction manual of ESP8266 is a bit difficult to find, but we did it finally. We need a few instructions:

A few points to remember: